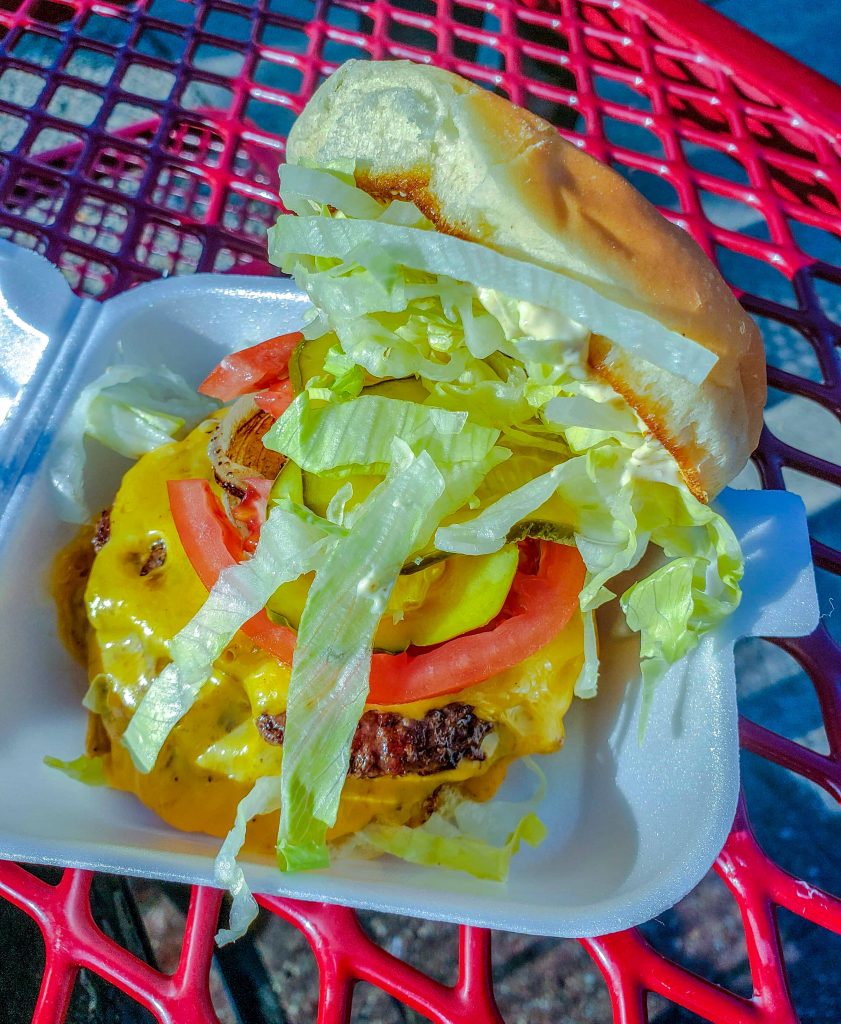 In honor of the upcoming Detroit Burger Week, I thought it would be fitting for our first Dish Battle Royale to be just that: The Burger, one of America’s favorite foods. Specifically, I want to battle the burger that I’d like to call, “The Fast-Food Gourmet Burger.”

(…or as I unofficially call it, the “What’s Closest to an In-N-Out Burger Out Here?” Challenge ?).

In case you haven’t read my bio, I was born and raised in Southern California for the majority of my life. And just like most Southern Californians, nothing says home than a good ol’ In-N-Out burger. So first, an homage to In-N-Out. We were there this weekend during our Las Vegas trip. ??? 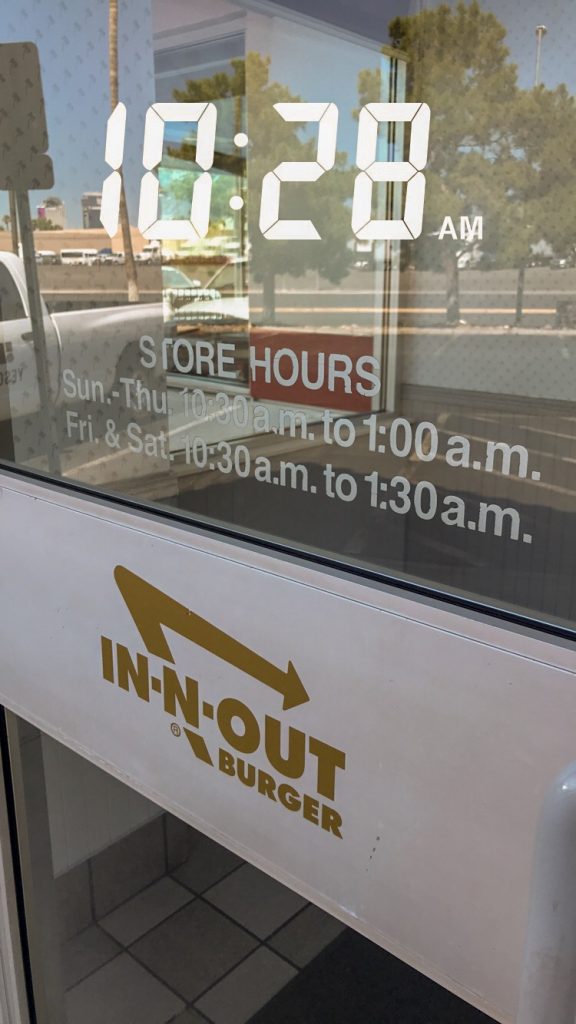 YES, I was there right when it opened! Photo: PB + B’s Snapchat 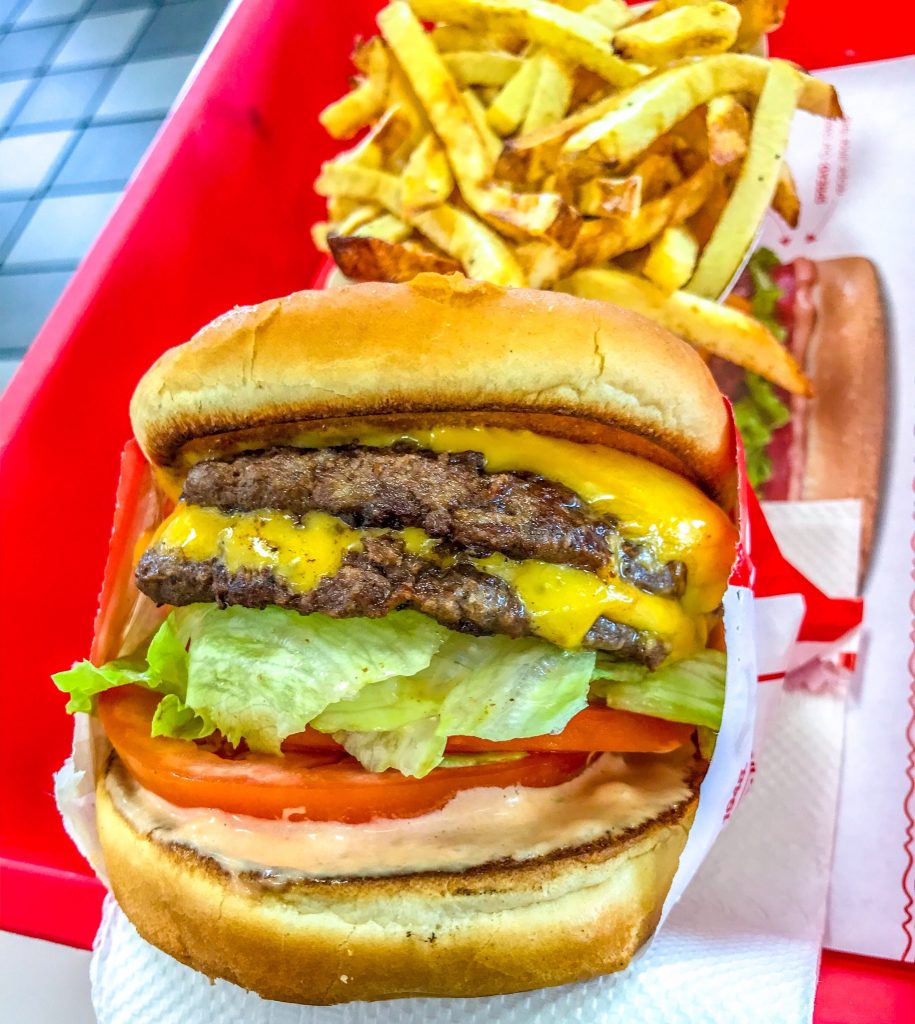 I got the Double Double with fries and a pink lemonade. No, it wasn’t animal-style. Photo: PB +B

While I admit my opinion is a bit biased as I grew up eating it, if you haven’t experienced an In-N-Out burger, DO IT.

…Anyway, my travels have taken me far and wide, but other than in the west coast, I could not find something that satisfied my In-N-Out craving…at least not until I moved to Detroit.

There are a few spots here that have tickled my fancy and reminded me of my roots. I’ve narrowed it down to two contenders.

NOTE: This is a “fast-food burger.” I’m aware you can get awesome burgers at a sit-down restaurant (such as Red Coat Tavern) or even some chain restaurants, but I specifically focused on local places that had counters you can order from.

To make sure I had a good comparison, I actually had all 3 burgers within a week of each other (we were in Las Vegas earlier this week), instead of trying to remember what they tasted like months ago. In addition, I tried their versions of a Double Cheeseburger to ensure equal comparison. 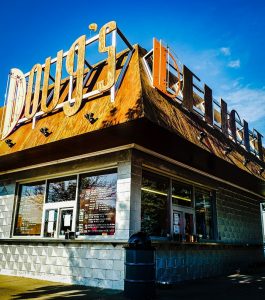 ‘Hokay, so I obviously went there for the delicious ice cream, but on a whim Ryan and I decided to check out the burger (plus how dare I suggest he eats ice cream??). Doug’s Delight is a walk-up ice cream shop that also serves savory foods. We went for the burger here because we heard it was a diamond in the rough (who would expect an ice cream place to also be known for their burger?), and knew great things about the people in charge.

Fun Fact: The primary owners of this place also own Mabel Gray, one of the top restaurants in Metro Detroit. Mabel Gray also happens to be right across the street! 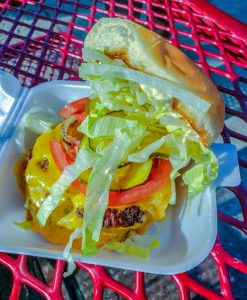 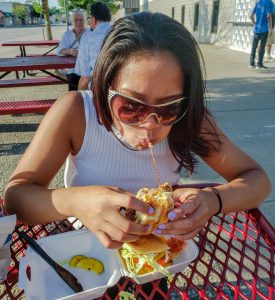 Stuffing my face at Doug’s. Photo: PB + B

The burger was delicious! We had to wait about 10 minutes after we ordered and it took less than 5 minutes to eat the whole thing. Ryan even had a few bites himself! The burger was juicy, the bun was soft, and the ingredients were fresh.

What I loved most about this burger was that I was pleasantly surprised–surprised that one of my favorite ice cream places also served amazing burgers, and surprised that I felt the In-N-Out nostalgia from this burger. 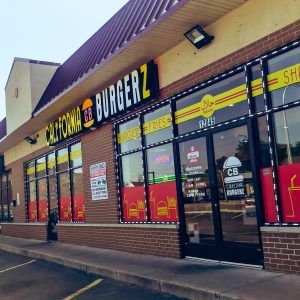 This place is a little under the radar, but after reading about how California Burgerz is completely modeled after my beloved burger spot, I felt like I had to check it out, especially since I am a native Californian.

I definitely felt like I was at an In-N-Out when I first walked in. The menu was small, and in addition to your typical burger menu, they also serve Gorilla Burgers, which are similar to Double-Double “animal-style” but served on a pretzel bun. I was tempted to order that, but my goal, of course, was the double cheeseburger.

Fun Fact: All of their meats are Hallal! I never would have expected that! It was also opened up so that neighborhood kids have a local hangout spot. 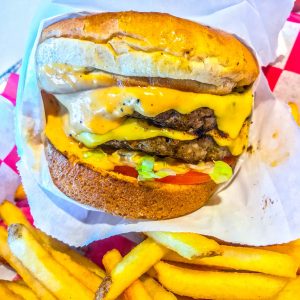 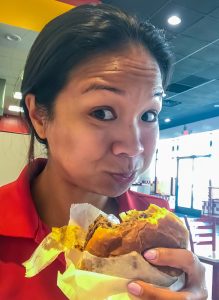 Stuffing my face some more. Photo: PB + B

Like Doug’s, I had to wait about 10 minutes after I ordered for my burger and it took about 5 minutes to eat and satisfy my (very full) belly. Visually, California Burgerz definitely nailed the double cheeseburger to In-N-Out’s Double-Double. The burger was super juicy due to the thickness of the patties.

Similar to any In-N-Out burger, this burger also uses their own secret sauce: “CB Sauce.” The sauce differed from In-N-Out as there was a nice spicy kick after every bite, but I thought it really brought the burger together.

HIS VOTE: He actually opted out on this battle. Lame. (EDIT: I later found out that he would have picked Doug’s)

HER VOTE/THE WINNER: In-N-Out, clearly.  Let’s take a look at that burger again ? 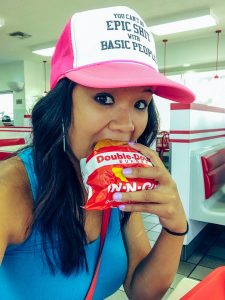 In all seriousness, both burgers were ABSOLUTELY DELICIOUS and I craved for seconds. To be honest, before eating both burgers,I thought I would’ve been sold by the California Burgerz because it mimicked the In-N-Out feel very well, including the inside of their store, their hours, and their overall service.

I definitely have a soft spot for both burgers, and both places are well worth going out of your way for, but I would say the one that tugged on my heart strings the most was the burger from Doug’s. What sold it for me was the nostalgia I felt when I ate the burger. The taste and overall feel felt closest to an In-N-Out burger. I still have and will frequent California Burgerz, especially when I am in the Hamtramck area.

Disagree with the verdict? Have a better spot? Feel free to comment below, or even join us in our next food adventure! And don’t forget to check out some of the restaurants listed on the Detroit Burger Week website week of August 19th!

Caroline is one of the main bloggers at Peanut Butter + Bacon. She is a career-driven 30-something year old who finds passion in every aspect of her life--a modern-day polymath of sorts. Though she is native to Los Angeles, CA, she has called multiple places "home," including but not limited to: Chicago, Philadelphia, St. Louis, and The Philippines. She finds joy in traveling, as it is a way for her to learn about different cultures and to give her a better perspective about life.

You can typically catch her at the volleyball courts, the orchestra hall, or the poker tables.